If you live in some of Perth’s new developments then chances are you will have an Irritrol Kwikdial control box like the one below. 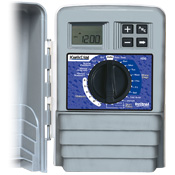 I can only guess that the developers picked these up as a real bargain because they are far from being the best control box on the market.

Their major fault is the absence of a battery backup, so every time you have a power outage you lose your settings. However it is also common to be rung and told the controller is showing the word ‘fuse’ and failing to run on one or more stations.

Nine times out of ten the fuse message indicates a faulty solenoid coil. If it shows up when you try to run every station then it is most likely the master valve. If it only faults on a particular station then that is the one that needs replacing.

To test if it is the master solenoid remove the master solenoid wire from the control box, reset the box so the ‘fuse’ message disappears (put a flat blade screwdriver over the ‘reset’ terminals) and then test each station in turn.  If nothing faults then you have found your problem.

If it still shows a fuse message then simply observe which station it faults on and that will be the source of the problem.

The next task is to find the solenoid and replace the coil. I have written about how to do this here.

Occasionally it is not the coil that is the problem, but its actually the control box. Unfortunately the only way to verify this is by eliminating the variables. I’d suggest you start with the coil as its much cheaper to replace, but be aware that you might have to replace the box as well.

If you need a kwikdial manual then you can get one here.