Have you lost the display on your control box? Have your sprinklers stopped coming on? Or is your controller just old and difficult to operate?

We can help you. New controllers start at $385.00 inc GST fully installed by a licensed electrician

Call 0400044236 or email here to make an appointment for Andrew to come and replace your old controller with one that works well. We can install standard push button controllers or any variety of the newer WiFi enabled smart controllers!

Or you can search through the archives of information on this site to try and find a solution for yourself.

As they have done for a few years now, the Water Corp are trying to help households make the switch to smart controllers.

These devices are a massive step up from your standard retic box in that they are able to configure your irrigation based on up to the minute weather info from your local weather station. So now you don’t have to trust your rain sensor to pick up moisture and activate. These devices tune in to local weather and respond immediately.

As they are a little more expensive to buy the Water Corp are offering an incentive of $300 rebate on future water bills for those who make the switch. That’s a massive saving!

So if you would like a smart controller installed and you are keen to save the $$ give me a call. I have an electrical license so can change it for you within a few days.

For full info on the offer go here.

Winter is a very quiet time for reticulation repairers so we have started a new business to keep us busy when the down times hit.

Caravan weight is a very important issue and it is easy to be overweight, dangerous and illegal. Our business involves coming to your home, using our heavy duty scales to weigh your caravan and tow vehicle and then give you a report on what needs your attention.

We then take the time to talk you through what changes – if any – need to be made.

We are looking forward to being busy all year round! Have you ever found a water meter that either won’t turn on or off? Like the tap is just stuck?

This week it happened again – about the third time in 11 years but I knew what to expect.

The water meter was on but the tap timer I had installed was leaking a little and I went to turn it off and fix the seal.

But it wouldn’t budge – and I knew that taking the grandpa wrench to it was most likely going to snap it.

So I called the homeowner out, explained the situation (the water had to be turned off) and then began to gently crank the wrench.

No major drama – just a call to water Corp to come and fix. Meantime I went around the back to try and tighten up the leaking tap timer but as I did it can’t apart and water gushed EVERYWHERE!

After a few minutes I managed to get a poly fitting screwed on and sealed the leak. I headed off to lunch and came back to see Anton changing the tap over. He did it ‘live’ which I thought was pretty clever.

Disconnect the water on the house side, create a way for the water to divert and then remove and replace the tap. Then turn it off…

Fixed… and I can go back this week and carry on!

Not if you don’t mind changing them every 6-12 months.

You can get really cheap budget sprinklers for $1-5, but as with everything in life, you get what you pay for.

We only use Toro sprinkler bodies which have excellent seals, springs and general construction. Generally you can expect 7-10 years from a Toro which in the longer term is much better economy.

If you have exceptionally bad retic flow and pressure then it could be that you have a restrictor fitted to your water meter.

This can limit the flow to 9l/min and mean that it’s very difficult to get an efficient system up and running.

If you aren’t sure then check with your plumber. You may go from 9l to 30l overnight!

This is a common question.

And the answer is usually very simple. Generally speaking this happens when more than one start time is set.

Unless there is a watering exemption in place you are only allowed to water once a day which means you only need one start time.

Often people get ‘start times’ and ‘run times’ mixed up. So get this :

YOU ONLY NEED 1 START TIME!

So when you set your controller make note of which function you are operating in the dial and just set the one start time.

If you get stuck then just give me a call! 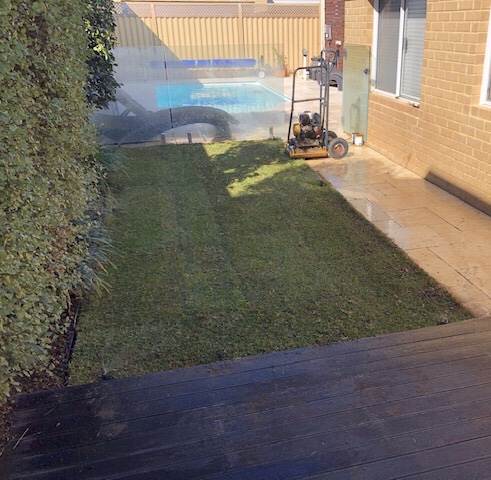 I have had a call each year for the last two years to come and replace the turf at this small backyard in Butler. A combination of young dogs and a shaded area means it has been tough for the lawn to survive.

It starts with a dig out of the old turf. Only 12m so not too much hard work. You can see the patchy old lawn below. 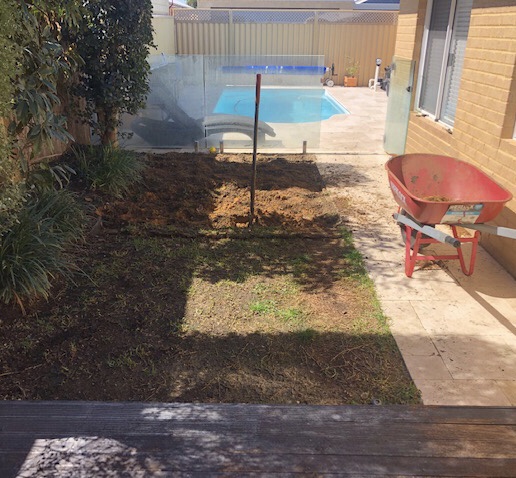 Then it’s time to screed and update the sprinklers with some mp rotators. The regular Toro nozzles were getting blown around in the wind and dirtying the pool fence. 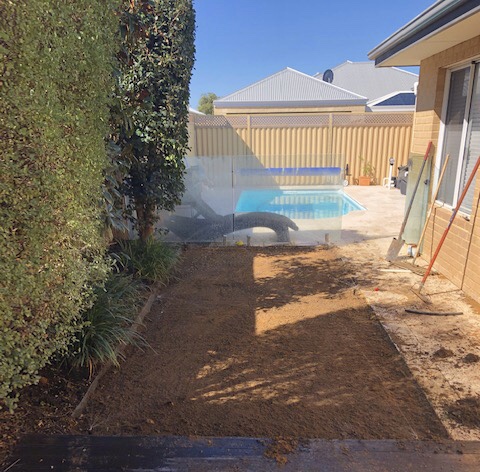 And from here it was a case of laying the Sir Walter slabs and making it look good again.

Hopefully he won’t need to call next year! 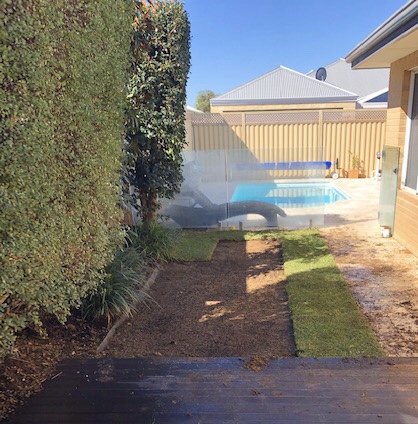 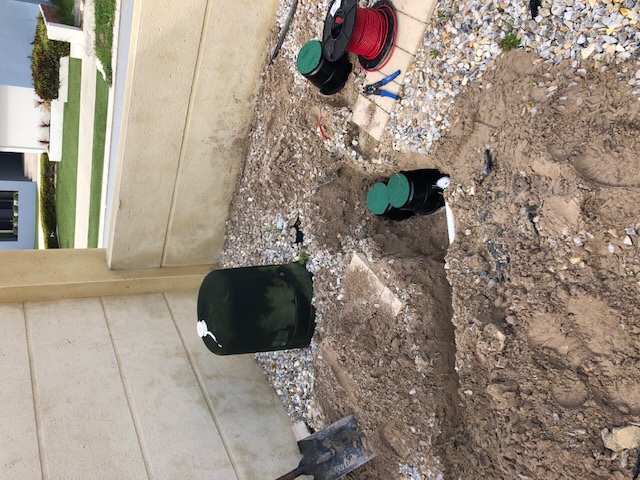 Today’s job was to install a backyard system for a client in Jindalee.

There was no retic in the place at all so we began with the sprinklers plumber, then the master valve and just one station solenoid to serve the lawn using MP Rotators. 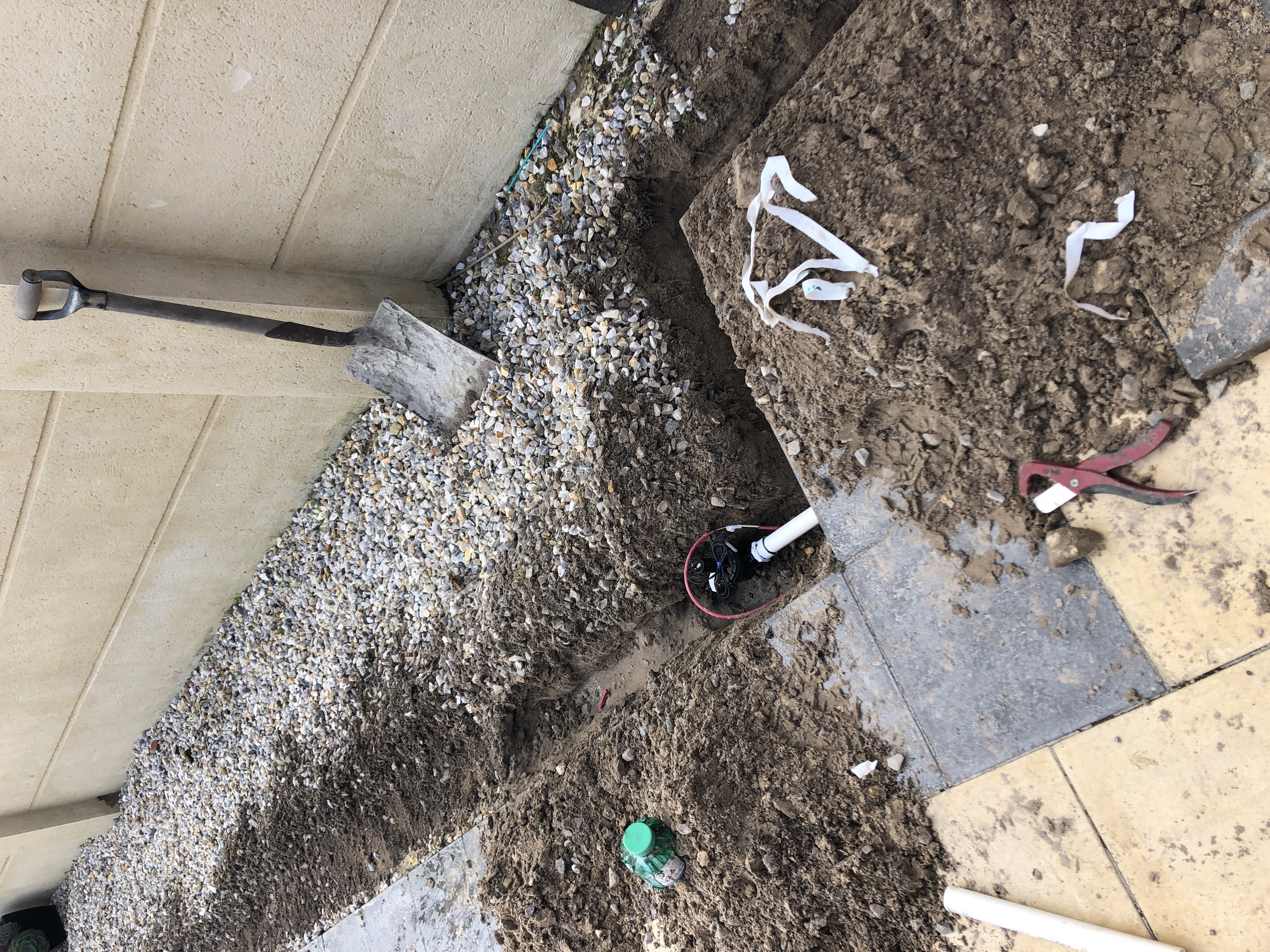 The trencher got a good workout in the established turf and we finished in good time. 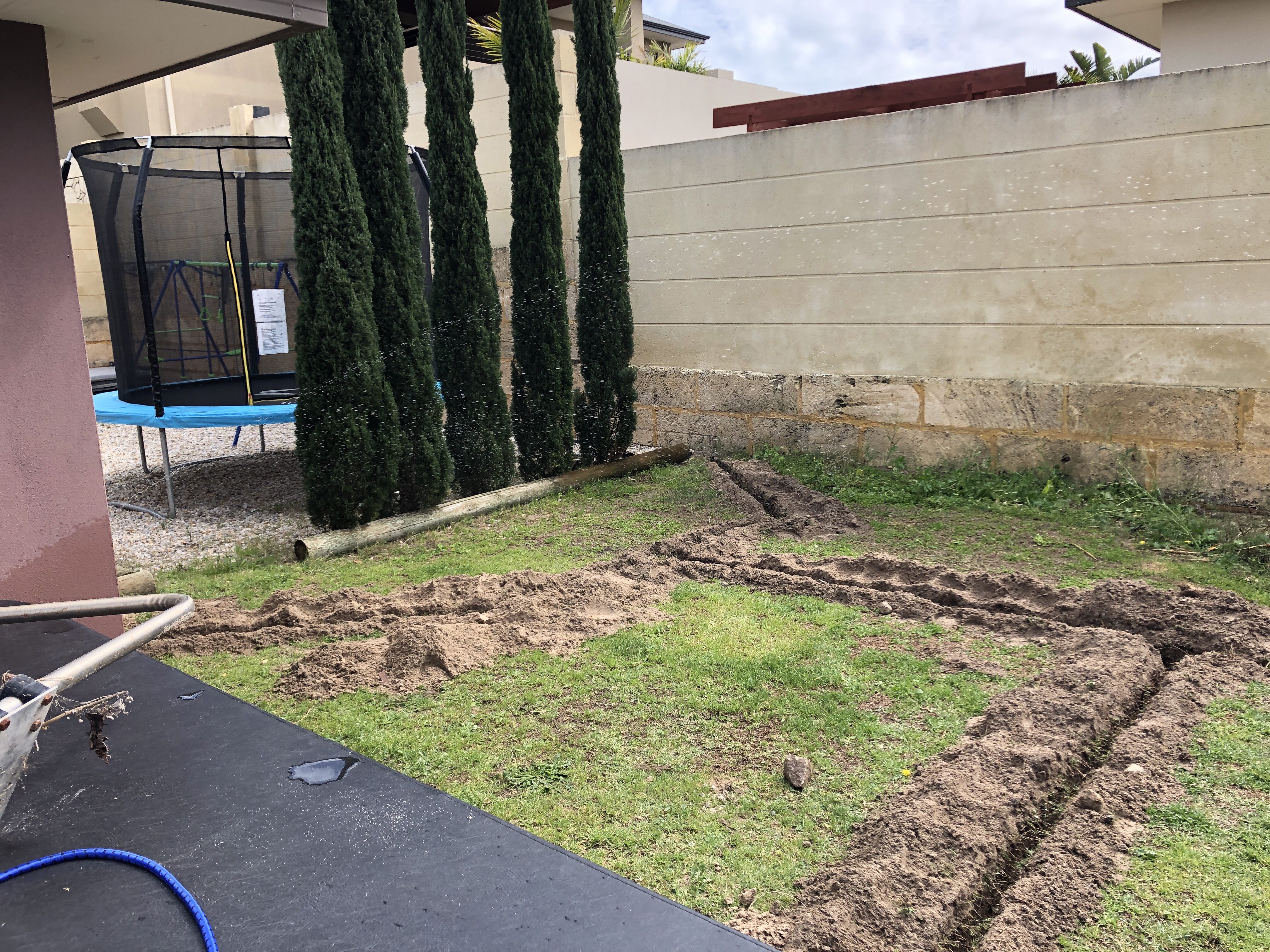 If you need retic installed in your backyard then be sure to give us a call!

A common misconception is that retic should run for 10 minutes.

You are allowed to apply 10mls of water on your watering day. This is where the confusion comes from.

(The difference is related to the spacing between the sprinklers.)

But don’t buy the 10 minutes thing!